The Semper Reformanda (Always Reforming) Conference addresses the church's need to continually reform to the image of Christ.

In keeping with our Baptist Reformed tradition, we address a different section of the 1689 London Baptist Confession at each conference.

The 2022 Semper Reformanda Conference, held on October 21-22, will be discussing the doctrines found in the sixth chapter of the confession: "Of the Fall of Man, of Sin, and Of the Punishment Thereof"

We would like to invite all pastors and their wives to join us for a special pastor’s luncheon on Friday, October 21, at 11:30.  The luncheon is free, but we do need you to reserve tickets here so that we can plan accordingly. (Please note that pastors’ luncheon tickets do not include conference admission. If you are planning to attend both, please reserve both a luncheon ticket and a regular conference ticket.)

**Note: We will be providing ASL interpretation UPON REQUEST.  Please email  if you are interested.

Voddie Baucham wears many hats. He is a husband, father, former pastor, author, professor, conference speaker, and church planter. He currently serves as Dean of Theology at African Christian University in Lusaka, Zambia.

Voddie makes the Bible clear and demonstrates the relevance of God’s word to everyday life. However, he does so without compromising the centrality of Christ and the gospel. Those who hear him preach find themselves both challenged and encouraged.

Voddie’s area of emphasis is Cultural Apologetics. Whether teaching on classical apologetic issues like the validity and historicity of the Bible, or the resurrection of Christ; or teaching on biblical manhood/womanhood, marriage and family, he helps ordinary people understand the significance of thinking and living biblically in every area of life.

Voddie and his wife, Bridget have been married since 1989. They have nine children: Jasmine, Trey (Voddie, III), Elijah, Asher, Judah, Micah, Safya, Amos, and Simeon. The Bauchams are committed home educators. 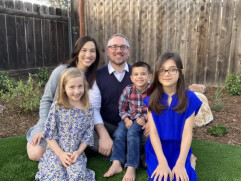 Please note that we will not be providing lunch on site this year.

Email  to inquire about our family rate (for families with at least 5 members).  No other group rates being offered.

We have a limited number of host homes available. Please contact

**Cancellation policy: If the event is cancelled for any reason, all tickets will be fully refunded.  If you need to cancel your own tickets, you may do so for a full refund any time before October 1.  From October 1 until October 14, we will offer 50% refunds.  After October 14 no refunds will be offered.